With the introduction of Nazjatar in 8.2 pet battlers were not left out. There are in total 12 legendary pets lurking in the depths waiting for unwary pet battlers.

This time there is no family achievement to be done for the new fights. Instead we got a task that is a lot easier than most of the previous achievements. Beating every pet battle boss in Nazjatar grants Nautical Nuisances of Nazjatar which on its own doesn't give you anything.
However it is one of the 4 requirements to Team Aquashock; a meta achievement that rewards you with the awesome pet Nagalgue! To get this you'll have to beat all the legendary pets and capture every wild pet in both Mechagon and Nazjatar.

Even though there are quite a lot of fights scattered across the area it doesn't take much to defeat them.
The zone is pretty large and hard to navigate through, making it difficult to find every single boss but if you are using TomTom you can copy those coordinates to locate them. 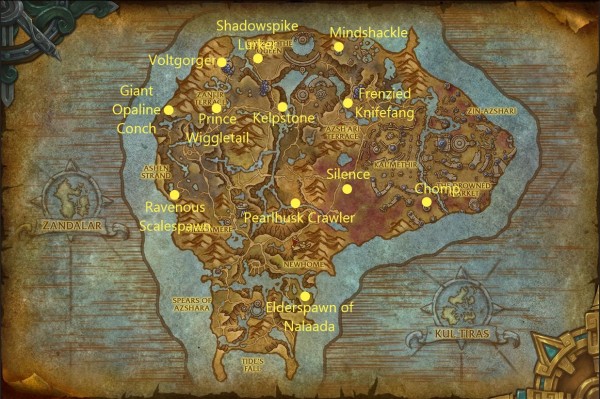